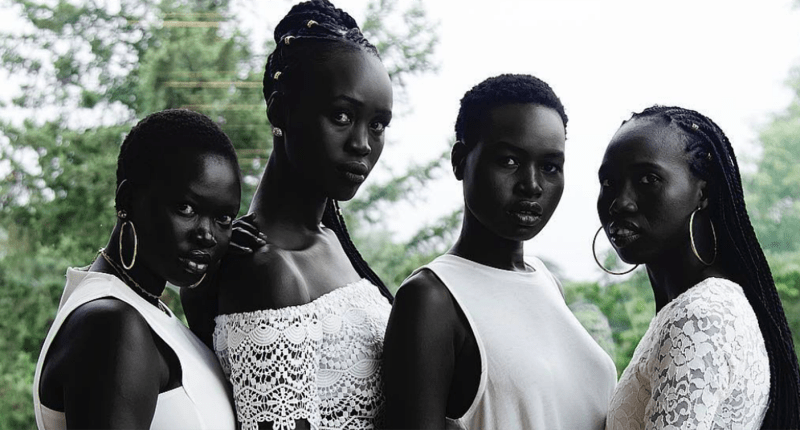 What happens when four gorgeous South Sudanese women gather to eat breakfast dressed monochromatically in white and are photographed? It creates a stir on social media.

The creative director and photographer behind this artistic shoot is Isaac West. He tells Yahoo Style that “as a conceptual photographer I am more into uplifting women of colour, to show the different beauty and different shades of colour of women, especially black women,” he says. “For this project, I wanted to just do dark-skinned women, that was my main focus.”

West shot the photographs in Minneapolis, where he lives now, and recruited South Sudanese women who live in the area to sit for the shoot. He chose to dress them in all-white outfits to provide the most contrast against the models’ gorgeous skin.

West and the models got together at 11 in the morning to take the pictures and didn’t pretend to have breakfast — they actually had breakfast. “I wanted them eating together, to show their oneness and their sisterhood and that there’s no division, only friendship, and love.” He calls it the “simple love of togetherness.”

West now lives in Minnesota, but he is originally from Liberia. He left Liberia for Ghana because of the country’s civil war, and then in the mid-2000s, he and his family went to the US.

West says he draws his creativity from his heritage and his purpose is to highlight and bring more representation of women of color to the media, especially in art and fashion. West is also a fashion designer and is currently enrolled in college, where he is studying TV production and art.

The photo shoot has been online for only a few days but has already received thousands of likes and comments, almost all of them offering praise.

“Look at all this beauty. Thanks sisters for staying true to your colour. I always see it shining through,” one commenter wrote. Another commenter added, “Everything about this picture is gold.”

Friday Chuol, 24, one of the models in photo shoot, tells Yahoo Style of her decision to participate: “I decided to be a part of it because if I can show that I am dark-skinned without apology, this may impact a little girl who’s struggling to find beauty in herself. I want to show the girls that look like myself to embrace their inner and outer beauty.

“I still can’t believe the attention it’s gotten, but you can’t deny that the photos send an incredible message to dark-skinned girls worldwide,” Chuol says. “I love it.”

As for what the future holds for West, “I have my sights on big names I want to collaborate with,” he says. Which artists might those be? “Rihanna, Solange, and Yeezy.” All eyes on you, Mr. West.