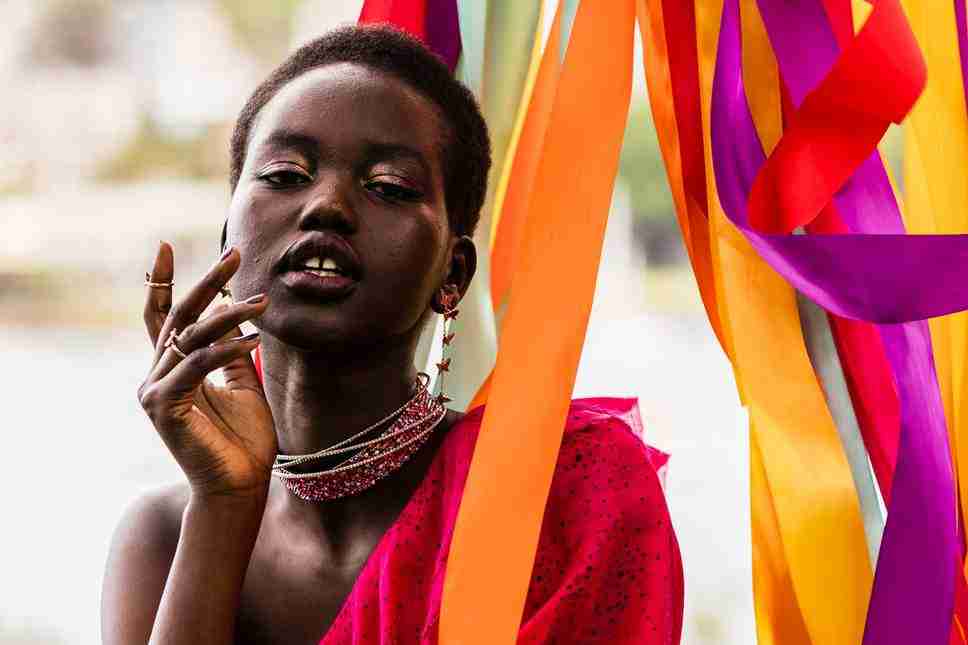 Eighteen-year-old Adut Akech has a number of dreams. One: Earn a business degree and open schools in her native South Sudan. Two: Become a journalist and inspire other women to lead. Three: Build her own empire by the age of 30, so she never has to work for anyone else ever again.

It could happen. Her current career — as one of the world’s most sought-after young models — must have seemed just as ambitious a goal.

It was only two years ago, mere months after graduating from high school in Adelaide, Australia, that she made her runway debut, walking as an exclusive in the Saint Laurent Spring-Summer 2017 show.

Since then, she’s walked for the likes of Christian Dior, Burberry, Alexander McQueen, and Prada, and this past July became only the second black model to close the Chanel haute couture show.

“Even if I become the richest model in the world I will still be a refugee. I am a refugee.”

Then, of course, there are the covers for Italian, Korean and British editions of Vogue; the editorials with Tim Walker, Mario Sorrenti, Juergen Teller, and Inez and Vinoodh; and the major advertising campaigns for Saint Laurent, Valentino, Versace, and Moschino.

“No one looks like Adut,” wrote Edward Enninful, editor of British Vogue, in an email. After seeing her walk for Saint Laurent, he enlisted Akech for the 2018 Pirelli calendar shot by Tim Walker; and, more recently, put her on his May 2018 cover.

“Not only is she extraordinarily beautiful, but she also has a sweetness that comes through in her pictures. If Naomi Campbell and Alek Wek had a love child, it would be Adut.”

Earlier this month, during New York Fashion Week, Akech was taken by surprise when she’d made the Business of Fashion’s (BoF) annual 500 lists honoring the professionals shaping the fashion industry.

“I was freaking out when I found out about it, I never thought I’d be chosen,” she said. “I always look at BoF. Imran said to me, ‘I’ve been following your work for the last two years and it’s incredible, you’re so inspiring.’ So there are people out there seeing what I do. It’s amazing.”

Why does she think everyone’s paying attention to her? “Maybe it’s my personality, how I carry myself. I’m very friendly, easy to get along with,” she said. “I feed off energy and vibes.”

Born in a refugee camp in South Sudan amid ongoing conflict with the north, Akech grew up in Kenya’s Kakuma refugee camp, before moving to Adelaide with her mother and five siblings.

“Even if I become the richest model in the world I will still be a refugee. I am a refugee,” she said. She still remembers those early years in Kenya, and her mother’s struggles to support her family. “When I first moved to Australia at age six, I promised my mother I would finish school, buy her a car and make something out of myself.”

The path to fame has been far from easy. From a young age, she was bullied for the way she looked — her dark skin, her lithe physique, and particularly her full lips and her trademark tooth gap. One early cover shoot for an Australian magazine was tainted by an employee’s complaints that her look wouldn’t appeal to their audience.

“It’s going to take a while to see this change take over,” she said. “But it makes me very proud to be a model at this moment where I can be part of that change.”

Akech hopes her own success can inspire others, showing young girls that “black is beautiful,” much in the same way that Naomi Campbell (“She’s like my mom here”), Alek Wek and Lupita Nyong’o did for her.

“I want to tell the girls who look like me and girls who have insecurities that, instead of hating (their appearance) and trying to cover it up, they should just embrace it and be proud of it,” she said. “Don’t let others define who you are.”

Today, as debates around fashion and beauty’s longstanding lack of diversity and inclusivity trigger historic waves of change, this kind of experience is a sobering reminder of how much the industry still has to evolve. But Akech, part of a new cohort of models defying Eurocentric standards, is optimistic that attitudes are changing.

Now, more and more designers and magazines are casting women of varying skin tones and body types, while those who don’t face widespread criticism on social media.