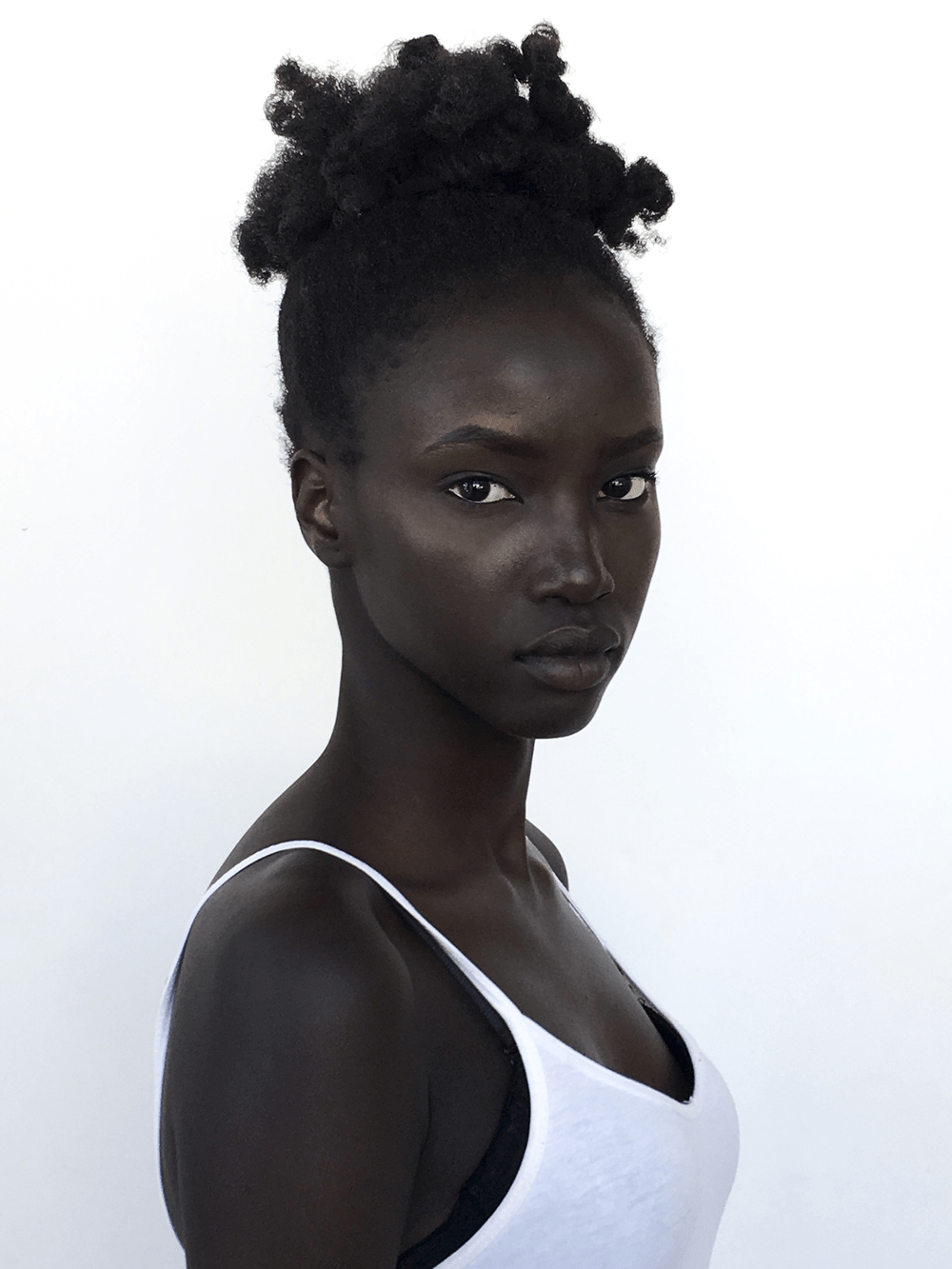 When it comes to great discovery stories, it’s hard to compete with Anok Yai. In a matter of weeks, the Sudanese newcomer has moved from an unknown face to becoming one of the Internet’s darlings, all thanks to a viral image. Busy studying biochemistry at Plymouth State University, Yai headed out to enjoy the famed homecoming weekend at Howard University in Washington D.C. only to be snapped for a street style image by the photographer Steven Hall, who shared it on his popular Instagram account, @thesunk. Quickly racking up more than 19,000 likes and garnering Yai thousands of new followers in the process, the image made an impression—one that Yai never considered when she posed for it. “I first saw the photo after my phone started getting the notifications,” she said.

Yai was curious about modeling but had no idea of how to to get her foot in the door. “I always was inclined to do art and fashion, but I didn’t know how to get into the industry,” says Yai who can remember watching shows like America’s Next Top Model as a child and following fashion growing up. It seems appropriate, then, that her viral snap piqued the interest of one of modeling’s most influential, Kyle Hagler, the president of Next Management. In town to visit his own alma mater, the fellow historically black college Morehouse, Hagler received a fateful message from a friend. “What’s funny is when I was a teen in college, I would go to Howard’s homecoming a lot because they had a better football team and a cooler scene. We always drove up to D.C., so I was kind of watching Howard’s homecoming virtually,” says Hagler, who was struck by Yai’s runway-ready look and her book smarts. “Anok has something very special. She’s not only beautiful, but she’s intelligent and has a real understanding of community.”

Speaking to Yai gives a sense of her priorities. Initially working toward her biochemistry degree with the hope of becoming a doctor, she wants little girls to feel empowered to pursue STEM fields. “I knew that I’d be able to help people and that’s my overall goal in life,” says Yai, who feels gendered cultural expectations often prevent young women from entering the field. “I definitely want girls to be looking into those [STEM] programs. Women aren’t always raised to be as great as they can possibly be. They’re told to care about more how they look and be extremely feminine. [As a result,] science, math, and technology are still considered male jobs.”

The importance Yai places on helping others comes from her upbringing. Coming to the United States in the year 2000 as a refugee, she and her family fled the Sudanese genocide. They made it first to Egypt and then to New Hampshire, where Yai and her siblings spent five years in government housing. “My parents worked very hard to put my siblings and I [through school] to be able to be set up for success,” says Yai. “They put in up to 16 hour days in order to save enough money, so we could move to [Manchester] and we have been living there ever since.”

Now that she’s a signed model, Yai hopes for more than campaigns and covers. What she’s looking for is the chance to change perceptions—especially those pertaining to beauty. As a dark-skinned black woman, she feels a responsibility to speak up about the negative effects of the colorism that remains prevalent in fashion imagery. “When I was younger, I was insecure about my skin because I looked up to people in the media and, though I looked up to the black women, I never saw black women that were as dark as me.” Stressing the importance of representation, she hopes her presence will help to bring about change. “I definitely want to be a role model for young dark-skinned girls and girls in general—I want to bring to light ideas of self-love and self-confidence,” says Yai. “I am so excited about where this will take me and I’m happy because I can do what I am passionate about.”