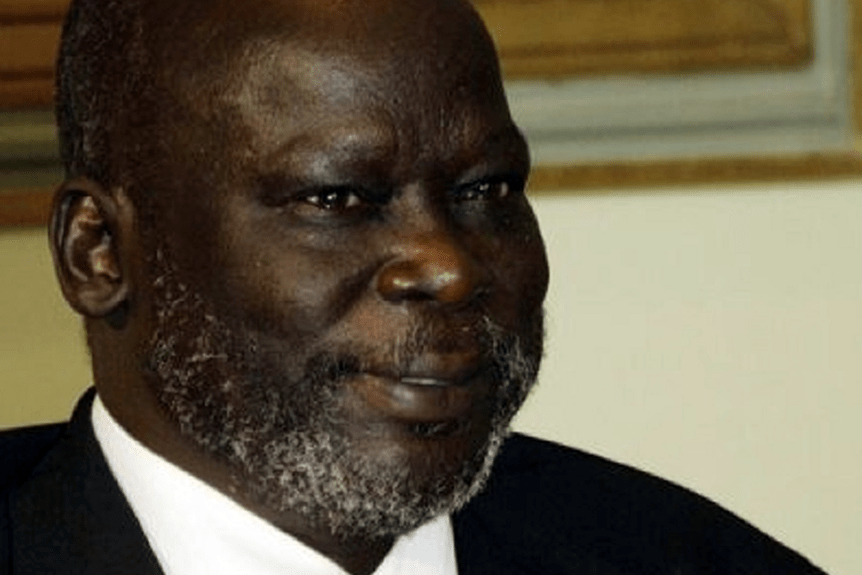 Dr. John Garang de Mabior stood in the middle of the soccer field at Pinyudo. Dressed in military fatigues and spoke carefully in Dinka and paused for the translators to repeat his words in Nuer and Arabic. “I give you the pen in the right hand and a gun in the left hand. You are the future. You are the seed for the new Sudan.”

We students were ready for military training. Led by Kiir Chol, we sang our readiness.

Our Commander-in-Chief said, “You, Red Army, when you are going to do this training together, but for now you need to study for your education. Your war will be a war of tomorrow, a war of development.” During my years in Pinyudo, I took both sides of John Garang’s message seriously. I worked hard at my military training and I worked just as hard to master my books. I tried to harden my body to be ready for battle while I tried to develop my mind to be ready for the challenges of the future.

It was a long struggle to win the war; and in the end, we didn’t win a new life for all Sudanese but the right for South Sudan to its own existence. At least, the Comprehensive Peace Agreement gave us an opportunity to set down our guns and take up those pens. South Sudanese independence has been won, it was time for our country’s leaders to make use of those who have been educated in the arts of peace so that we could win a new battle, the one against poverty and disorganization.

Have we succeeded in making that transition from war to peace, from military training to education? Sadly, the answer is no. Instead of drilling wells, building schools, constructing the road, our nation is buying weapons. Tribe fights tribe. Community battles community.

What has gone wrong? First, the SPLM has never reinvented itself. When the movement began, its goal was to revitalize an existing system, the nation of Sudan. As that goal gave way to the creation of a new state, the SPLM failed to explore what that new situation would mean. Specifically, the SPLM failed to design a government that would provide central authority and respects tribal differences. More particularly, the tribes and communities that were in alliance with the government in Khartoum during the war still view the SPLM as a Dinka movement. The SPLM has failed to persuade and educate those areas leaving our country with unhealed sores, sores that produce anger and rebellion.

We need a national convention with the goal of nation building not just the continuation of the SPLM.

In order to have a successful national convention, it will be necessary to include those who have an education and who can articulate new goals and methods. The people who have served our country with a gun in hand have to recognize that there are others who have followed the example of John Garang and many other SPLM leaders and sought an education in addition to military

And, while the SPLM continues to be the central inspirational source for our country’s future, we have to recognize the goal of including all our citizens as we move ahead.

Moving ahead is necessary. Our country is rich in resources and possibilities. Sadly, it is also filled with pessimism and a sense of hopelessness. Those with no opportunities and education have little choice but to march around with weapons. That is what is happening today in South Sudan. It is not what we want or needs for our future.

That is why any national conference must include participation by and consideration of the young. Offering our youth, the opportunities of the modern world will be a big step in stopping the internal strife and turning South Sudan into a nation of peace and prosperity.

The author, Deng Mayik Atem, one of the “Lost Boys of Sudan,” is currently Secretary General of the South Sudanese Community Association in Arizona. A graduate of Arizona State University, Mr. Atem has dual citizenship in the US and South Sudan, and recently visited the country of his birth to see family he has not seen for over thirty years. He is currently writing a memoir, “A Journey Across World.” You can reach him via his email: azdengatem@hotmail.com