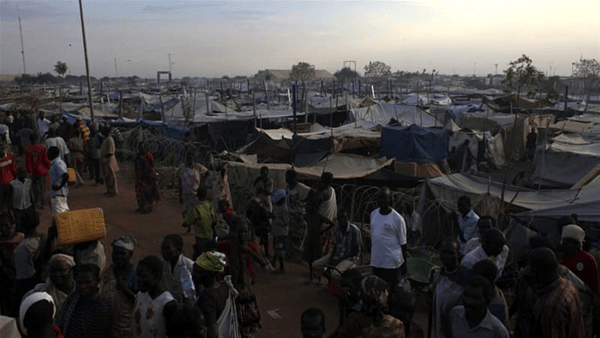 I know and have seen war and its horror and cruelty in my own country. I have supported peace processes in conflicts since. But all of that didn’t quite prepare me for my trip to South Sudan earlier this year.

Since civil war broke out in December 2013, South Sudan has spiralled into a deeper state of emergency. It’s a brutal conflict, steeped in claims of ethnic cleansing. A deadly hunger crisis reigns over parts of the country: It is the civilians, the women and the children who are paying the price. The palpable hope of South Sudan’s independence in 2011 – something so many of us celebrated in our region –  now seems very distant.

Women – strong, hard-working and self-sacrificing women – told me, “We want to walk freely, we want to farm, we want to feed our families.” They live in a city called Malakal, on a “Protection of Civilians” (POC) site. “At home, we used our hands for our work, now we have been turned into beggars, and we cannot provide for our families,” Mary* told me. She lives on the site now, and like many women has been widowed by the conflict.

I visited what felt like a ghost town. Malakal used to be South Sudan’s second largest city after the capital, Juba. Now, most of its former residents have fled to neighbouring Sudan – the country that they fought for independence from so fiercely – or they live in the POC camps.

The camp I visited is now home to many displaced women and girls; it is guarded by UN peacekeepers who line its outskirts, in tall watchtowers. They carry heavy weaponry in case the camp is attacked – which it has been, on several occasions.  I urge our leaders to give space at the negotiating table not only to those wielding a gun!  It is not a stretch for me to compare these camps to open-air prisons. This is not because these people are detained – they are not. It is also not a criticism of the United Nations for creating these sites – they are needed and have undoubtedly saved countless lives so far.

The camps do however signify the tragedy that the people of South Sudan face: people are there because they need protection from armed groups. I was told that should a person walk out of this camp they face the risk of persecution, harassment, even death.

I will never forget the women I met who told me they have to choose between their children going hungry, or risking rape if they leave to search for food. The stories I heard are too awful to repeat. I saw the squalid conditions people have to live in, and I heard of the hunger people are enduring.

A war of this nature, which is now so deeply rooted, is unlikely to end without a huge diplomatic effort – something which up to now, has fallen short.

Ending the war in South Sudan must be at the very top of African leaders’ political agendas. It is a catastrophe for the entire continent and our region’s biggest refugee crisis. It is a shameful failure of leadership in Africa.

The people of South Sudan and our region need renewed negotiations to begin, in order to bring genuine and long-lasting peace to the country. Peace may feel distant, but it is not unreachable. In December, the Intergovernmental Authority on Development (IGAD) will be holding the High-Level Revitalisation Forum in Addis Ababa. It is a critical opportunity to bring together warring parties to seek a long-term solution to this bloody conflict.

I call upon our regional leaders to push the warring parties to make the hard choices for peace. And together with our partners, Oxfam demands that regional and international powers throw their diplomatic weight behind a transparent and inclusive peace process.

The voices of the people affected by the conflict – women like Mary – must finally be heard. I urge our leaders to give space at the negotiating table to them, not only to those wielding a gun.

Any political process must formalise the involvement of the South Sudanese people, including the millions of refugees now living in Uganda, Sudan, Ethiopia, DRC, and Kenya. This is the best way to establish a peace that lasts. Citizens have the right to determine the future of their country.

The longer the international community is complacent, the more they risk being complicit. Failure is not an option. To ensure a credible peace process, we need timelines, indicators, and accountability.

This latest push for peace could end this war. Let us ensure it is guided by its people – not just the political elites. No person I met in South Sudan wants – and none of our leaders should want – countless more lives to be ruined through this war.

The views expressed in this article are the author’s own and do not necessarily reflect Al Jazeera’s editorial policy.

When will peace come to South Sudan?