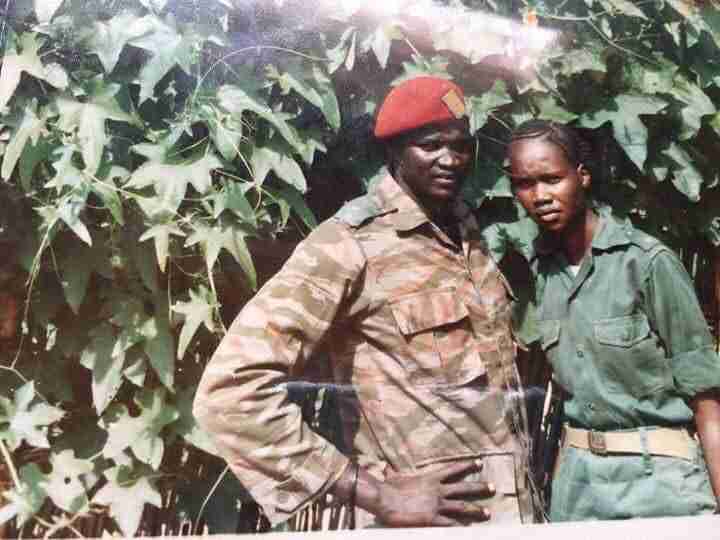 Crossing paths with a hero, my memory of Comrade Anib Marial Dot

We gathered around a small fire near the wall along the river and heated water for tea. It had poured during the night. Even though the rain had stopped, we were still wet and the cold of morning added to our sense of despair. We knew that things were going to get worse. Our leaders, Salva Kiir and Majak Agoot knew that, too. We stood shivering and reaching out towards that tiny fire for the little comfort it could provide.

That was when Lt. Anib walked by. She was all dressed up in a military grey fatigue uniform that was the signature of the Nile Battle. She carried a pistol, and a folding Kalashibkov-shai; a unique Ak-47 carried by a few officers in SPLA. She was walking towards the Gilo River. We stiffened to attention as she passed. All of us respected that remarkable young woman. She stopped to salute us and flashed her beautiful smile. Walking to the banks of the river, she stood staring into the flood.

In Dinka culture, when a stranger passes by when you are eating or about to eat, you must invite them to join you. But she was an officer and a woman. We debated what to do? Should we Dinka boys ask this beautiful woman to join us for tea or what? Garang Aluk, who was older than I, and my friend Majok summonsed our courage to invite her. With another warm smile, she accepted the invitation. I poured tea in my yellow cup and handed it to her.

“Oh, I have my cup.” She took her bottle canteen from her waist and I poured in the tea. Before she took a sip. I said “Hey, Comrade, let me I apologize. This tea is not a regular gagechai, we burned some sugar to the darkest possible to look like tea leaves (gagechai) and then we added sugar.

We stood drinking tea and talking about the river and how the current would prevent our taking the vehicles across. It was around 9 am. The number of people congregating near the river grew. There were only two small canoe-style boats. How would we all cross?

Around 11 am Cdr Salva Kiir arrived on the scene. As he approached, people called his name. Everybody wanted him to speak, to tell us what to do. He had already taken off his shoes and rolled up his pants legs because he was coming through a muddy road between Gilo One and Gilo Two, and as he walks into the middle of the crowd, his bodyguards followed close behind.

“As you people see,” he began, “the enemy is approaching. Jesh al sharvy is keeping them back for now, but I don’t see how long the army can hold them. You need to leave immediately, to find your way out. I am going to the other side of the river to tell the people there to leave. They don’t need to wait because this disaster should not happen to everybody.”

Several hours later, hell broke loose, the flooding river filled with people, many drowned, and a few made it safely. My friends and I headed eastward with First Lt. Ring Mabior Teny a.k.a Jenafil.

The last time I saw Comrade Anib was those precious moments as we shared tea and talked. A week later in Panchola I learned of her death, but I have never heard a full account of how she has died?

In the early 2000s, her family came to the United States and I met Anib’s daughter Alet Thomas kurou Tong Aleu. A beautiful and wonderful young lady who resembled both of her parents. When Mr. Pieng Deng Kuol came to the USA, I introduced Anib’s daughter to him. Mr, Pieng’s advice to Alet was, “Keep up your schoolwork because your accomplishments are the legacy of your parents.” This is advice that all of us who survived the Battle of The Gilo River should take to heart, that we are the accomplishment of our country and of the officers who led us through those hard times.