I just want to say my name is Emmanuel Jal. And I come from a long way. I’ve been telling a story that has been so painful for me. It’s been a tough journey for me, traveling the world, telling my story in form of a book. And also telling it like now. And also, the easiest one was when I was doing it in form of a music.

So I have branded myself as a war child. I’m doing this because of an old lady in my village now, who has lost her children. There is no newspaper to cover her pain, and what she wants to change in this society. And I’m doing it for a young man who wants to create a change and has no way to project his voice because he can’t write. Or there is no Internet, like Facebook, MySpace, YouTube, for them to talk.

Also, one thing that kept me pushing this story, this painful stories out, the dreams I have, sometimes, is like the voices of the dead, that I have seen would tell me, “Don’t give up. Keep on going.” Because sometimes I feel like stopping and not doing it because I didn’t know what I was putting myself into.

Well, I was born in the most difficult time when my country was at war. I saw my village burned down. The world that meant a lot to me, I saw it vanish in my face. I saw my aunt in rape when I was only five. My mother was claimed by the war. My brothers and sisters were scattered. And up to now, me and my father were detached and I still have issues with him. Seeing people die every day, my mother crying, it’s like I was raised in a violence. And that made me call myself a war child.

And not only that, when I was eight I became a child soldier.

Luckily now things have changed because I came to discover the truth. What was actually killing us wasn’t the Muslims, wasn’t the Arabs. It was somebody sitting somewhere manipulating the system, and using religion to get what they want to get out of us, which is the oil, the diamond, the gold and the land. So realizing the truth gave me a position to choose: should I continue to hate, or let it go?

So I happened to forgive. Now I sing music with the Muslims. I dance with them. I even had a movie out called “War Child,” funded by Muslim people. So that pain has gone out. But my story is huge.

So I’m just going to go into a different step now, which is easier for me. I’m going to give you poem called “Forced to Sin,” which is from my album “War Child.” I talk about my story. One of the journey that I tread when I was tempted to eat my friend because we had no food and we were like around 400. And only 16 people survived that journey. So I hope you’re going to hear this.

Voices in my brain, of friends that was slain.

of starvation. In the burning jungle, and the desert plain.

Next was I, but Jesus heard my cry.

As I was tempted to eat the rotten flesh of my comrade,

he gave me comfort.

We used to raid villages, stealing chickens, goats, and sheep,

anything we could eat.

I knew it was rude, but we needed food.

forced to sin to make a living.

Sometimes you gotta lose to win.

Left home at the age of seven.

Slept with one eye open wide.

at least one that I’ve killed.

But still as I wonder, I won’t go under.

As a child so young and tender,

no retreat, no surrender.

I carry the banner of the trauma.

War child, child without a mama,

still fighting in the saga.

Yet as I wage this new war I’m not alone in this drama.

No sit or stop, as I reach for the top

I’m on a fight, day and night.

Sometime I do wrong in order to make things right.

Ah! The children of Darfur.

Your empty bellies on the telly and now it’s you that I’m fighting for.

Left home. Don’t even know the day I’ll ever return.

My country is war-torn.

Music I used to hear was bombs and fire of guns.

So many people die that I don’t even cry no more.

Ask God question, what am I here for.

And why are my people poor.

And why, why when the rest of the children were learning how to read and write,

I was learning how to fight.

I ate snails, vultures, rabbits, snakes, and anything that had life.

I was ready to eat.

I know it’s a shame. But who is to be blamed?

That’s my story shared in the form of a lesson.

What energized me and kept me going is the music I do. I never saw anybody to tell my story to them so they could advise me or do therapy. So the music had been my therapy for me. It’s been where I actually see heaven, where I can be happy, where I can be a child again, in dances, through music.

So one thing I know about music: music is the only thing that has power to enter your cell system, your mind, your heart, influence your soul and your spirit, and can even influence the way you live without even you knowing. Music is the only thing that can make you want to wake up your bed and shake your leg, without even wanting to do it. And so the power music has I normally compare to the power love when love doesn’t see a color. You know, if you fall in love with a frog, that’s it.

One testimony about how I find music is powerful is when I was still a soldier back then. I hated the people in the north. But I don’t know why I don’t hate their music. So we party and dance to their music. And one thing that shocked me is one day they brought an Arab musician to come and entertain the soldiers. And I almost broke my leg dancing to his music. But I had this question. So now I’m doing music so I know what the power of music is.

So what’s happening here? I’ve been in a painful journey. Today is day number 233 in which I only eat dinner. I don’t eat breakfast. No lunch. And I’ve done a campaign called Lose to Win. Where I’m losing so that I could win the battle that I’m fighting now. So my breakfast, my lunch, I donate it to a charity that I founded because we want to build a school in Sudan.

And I’m doing this because also it’s a normal thing in my home, people eat one meal a day. Here I am in the West. I choose not to. So in my village now, kids there, they normally listen to BBC, or any radio, and they are waiting to know, the day Emmanuel will eat his breakfast it means he got the money to build our school. And so I made a commitment. I say, “I’m gonna not eat my breakfast.” I thought I was famous enough that I would raise the money within one month, but I’ve been humbled. (Laughter)

So it’s taken me 232 days. And I said, “No stop until we get it.” And like it’s been done on Facebook, MySpace. The people are giving three dollars. The lowest amount we ever got was 20 cents. Somebody donated 20 cents online. I don’t know how they did it.  But that moved me.

And so, the importance of education to me is what I’m willing to die for. I’m willing to die for this because I know what it can do to my people. Education enlightens your brain, give you so many chances, and you’re able to survive. As a nation, we have been crippled. For so many years we have fed on aid. You see a 20-years-old, 30-years-old families in a refugee camp. They only get the food that drops from the sky, from the U.N.

So these people, you’re killing a whole generation if you just give them aid. If anybody wants to help us this is what we need. Give us tools. Give the farmers tools. It’s rain. Africa is fertile. They can grow the crops. (Applause) Invest in education. Education so that we have a strong institution that can create a revolution to change everything. Because we have all those old men that are creating wars in Africa. They will die soon. But if you invest in education then we’ll be able to change Africa. That’s what I’m asking.

So in order to do that, I founded a charter called Gua Africa, where we put kids in school. And now we have a couple in university. We have like 40 kids, ex-child soldiers mixed with anybody that we feel like we want to support. And I said, “I’m going to put it in practice.” And with the people that are going to follow me and help me do things. That’s what I want to do to change, to make a difference in the world.

Well now, my time is going, so I want to sing a song. But I’ll ask you guys to stand up so we celebrate the life of a British aid worker called Emma McCune that made it possible for me to be here. I’m gonna sing this song, just to inspire you how this woman has made a difference. She came to my country and saw the importance of education.

She said the only way to help Sudan is to invest in the women, educating them, educating the children, so that they could come and create a revolution in this complex society. So she even ended up marrying a commander from the SPLA. And she rescued over 150 child soldiers. One of them happened to be me now. And so at this moment, I want to ask to celebrate Emma with me. Are you guys ready to celebrate Emma? 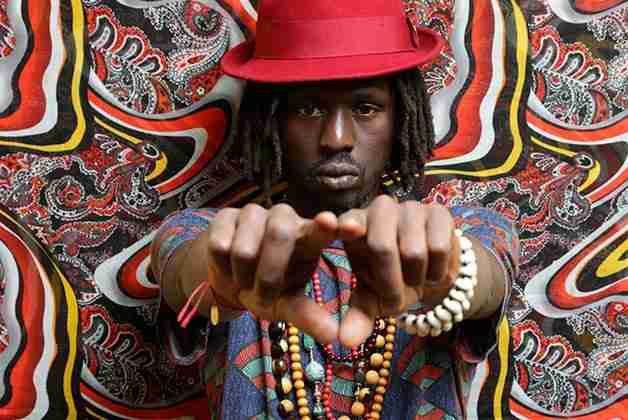 About Emmanuel Jal – For five years, young Emmanuel Jal fought as a child soldier in the Sudan. Rescued by an aid worker, he’s become an international hip-hop star and an activist for kids in war zones. In words and lyrics, he tells the story of his amazing life.