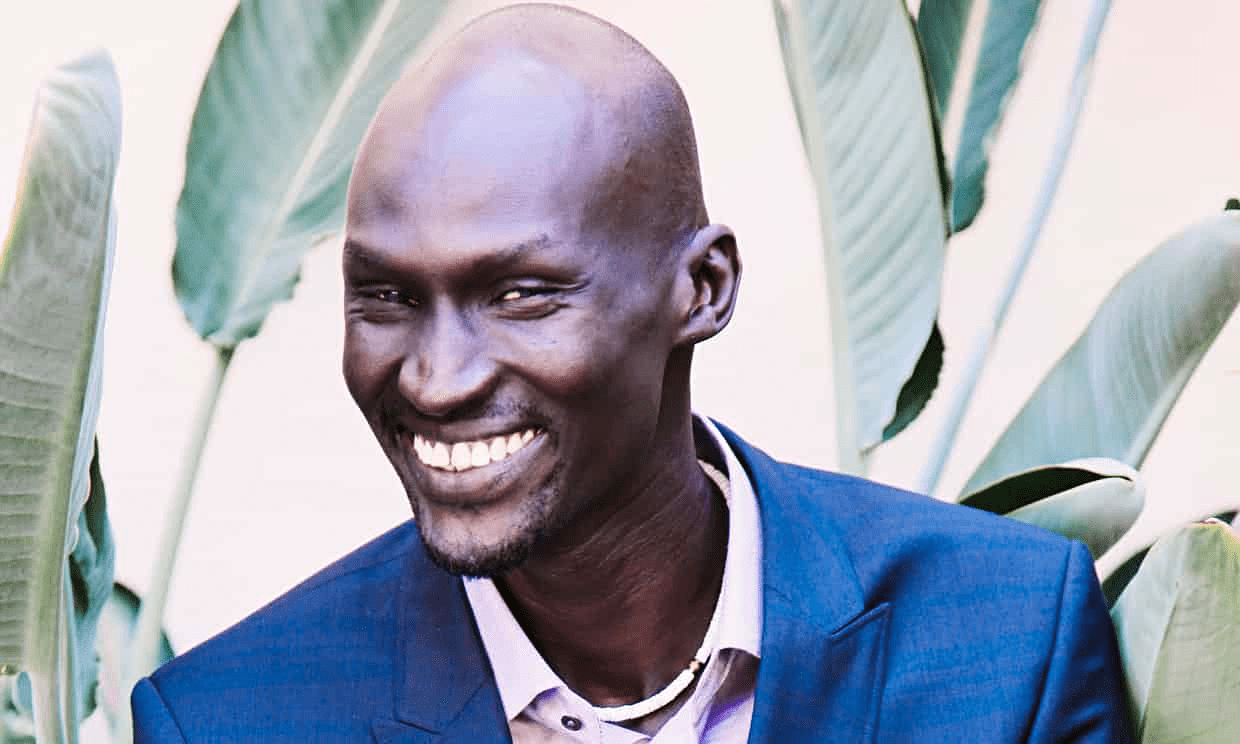 Ger Duany: ‘As an actor, I share my life story with other kids who are struggling’ 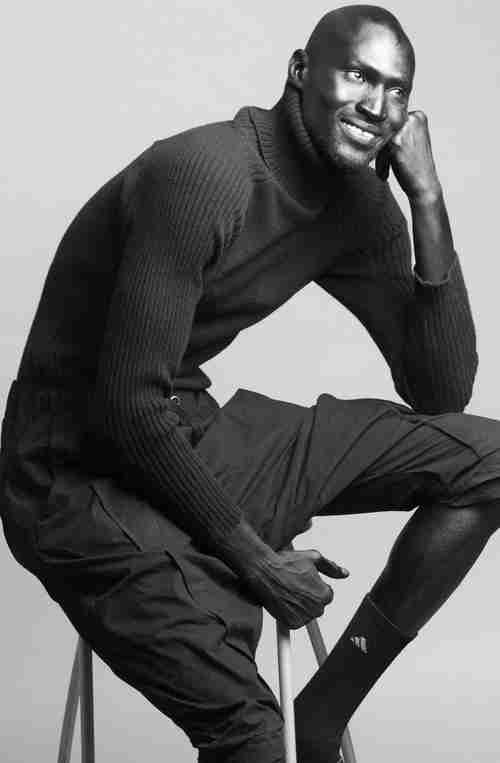 The Sudanese actor on being a child refugee, the healing power of basketball – and why LA beats NYC…

Ger Duany was born in 1978 in what is now South Sudan. Displaced by the civil war, he was forced to become a child soldier, eventually finding refuge in Ethiopia and Kenya and emigrating to the United States in 1994.

He was cast as a refugee in 2004’s I Heart Huckabees by director David O Russell, who wanted someone with the first-hand experience to play the part. An accomplished basketball player, he has worked as an actor and model ever since and is about to star alongside Reese Witherspoon, Arnold Oceng and Emmanuel Jal in The Good Lie.

The Good Lie tells the story of a group of “lost boys” – and one girl – who are orphaned and displaced by civil war in Sudan and eventually find their way to America. It mirrors your own life in many respects.

What did it feel like to see your experiences on the big screen?

It can be painful, you know when you go through that kind of journey with everybody else, and you struggle a lot… But I’m glad to have done the film – it will connect with a lot of people around the world. When you look around now you see other places going through the same problems, such as Ukraine and Syria, and the one thing that human beings really share is always pain. That’s why I thought The Good Lie was perfect – not only for telling the lost boys of Sudan story, but [the story of] all refugees, or anybody that ever witnessed war and loss.

Many of the events depicted are very difficult to imagine for people who have never experienced anything remotely similar – for example, the months and months of walking with little food and water, no shoes and in extreme heat to escape danger.

Yes, I walked thousands of miles – if they stretched them all out I probably walked from New York City all the way to London. Now, I think wow, I have a lot of mileage in my body. Even now I walk everywhere. I like hiking, I like walking long distance. 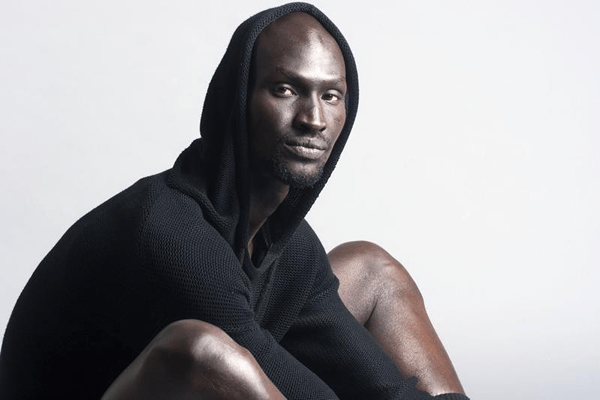 When I walk, I get to think, I get to meditate on my experiences; that’s a solitary journey for me while I’m in a city. But when you’re walking because you’re desperate, because you are being chased away by something, it’s another thing.

You arrived in America 22 years ago, and didn’t return to Sudan until a few years ago…

Yes, in 2010, when our country was going through a referendum, to vote for separation or to stay together as one country of Sudan. And that’s when many of us who left the country in the early 1990s were returning home for the first time. I went back to look for my mum and my siblings. I found them in the town where I left them; and then we went and voted together for something that we’d always been fighting for, independence. And that was a very moving time, and very exciting.

The moment of independence must have been extraordinary…

It was definitely overwhelming for many South Sudanese, including myself. Because when you look back into our civil war, it killed two to three million people, so life has been very difficult for over two decades of going through civil war. [We didn’t imagine] in our wildest dreams that we’d have our independence.

But the situation in South Sudan is still exceptionally difficult, isn’t it? What needs to happen for it to change?

The war is out of hand right now, and it’s out of the hands of those who are the leaders of South Sudan. Children, women and vulnerable young men are really suffering – scared and living in the bushes the way we were before. That’s the reason we need the UK, the troika, the US, Norway, all the European international communities, to come and negotiate a peace where the South Sudanese people can really gain their freedom.

You’ve said that discovering basketball when you got to America was a very big deal. Why was that?

Basketball helped me rest my mind a little bit, because I came from a tough background, I had a lot of challenges while I was growing up. I didn’t know how to keep my mind away from things that I had experienced, especially the tough conditions living in the refugee camp year in and year out. So when I came here, basketball was something that everybody was into, especially in the state of Indiana – basketball was like a religion there. So I got into basketball and then I forgot a lot of my problems and later on I got better in it, and then I even got a scholarship to go to university and play basketball there.

You have the natural advantage of being very tall – any team must have been delighted to have you?

Well, I’m not that tall, really…

Much taller than the others in the film, surely?

Oh, those guys are very short! They just make me look tall.

You began your acting career playing a refugee in the film I Heart Huckabees. What drew you to acting?

Acting is another form of telling stories, and I came from a background where we tell stories. But if I had my own way, maybe I would not be doing movies about war, because there would be no war.

And what about modeling?

I moved to New York City, and one day I was walking around and a man asked me if he could take my photo. He gave me his card and I did a fashion spread. And ever since then I’ve been doing a lot of runway in New York City for the past nine to 10 years now, and I’ve met a lot of great people.

And that’s how my story really started to come out because people are always asking me – hey, you’re that model guy, where are you from? And then I started to tell people my story and that’s when people realised oh, this guy really came from that terrible background and that’s how modelling and acting really brought my story out little by little.

I live in New York, but right now I reside in LA because if there’s anything to avoid in New York it’s the cold.

There’s a scene in the film when the boys are about to leave for America – they’re given a block of ice and told that’s what winter feels like. It must have been a shock to the system?

Oh trust me, it was brutal. When I came, I landed in Des Moines, Iowa. Des Moines was very cold, and later on, I went to Bloomington, Indiana, where I learned how to become a child, and it was a very cold place. Coming to New York it was another cold place. So this year I decided to go to LA, and just be in the sun. My work revolves between LA and New York and Nairobi, Kenya, which is always another home for me.

And what’s next on the horizon?

I’ve just been appointed a high-profile supporter to the UN High Commissioner for Refugees (UNHCR), and soon I will be a goodwill ambassador and will help Angelina Jolie doing the fantastic humanitarian work that she’s been doing for over 12 years.

The UNHCR was always one of my favourite organizations because it changed my life when I was a small boy – that was the way I survived in all the refugee camps that I lived in. So as an actor now, I share my life story with other kids who are really struggling in the civil war in South Sudan.

I’m also writing a memoir of my life. That’s been taking a lot of my time, and I hope to share that with people once it’s finished… And life goes on.