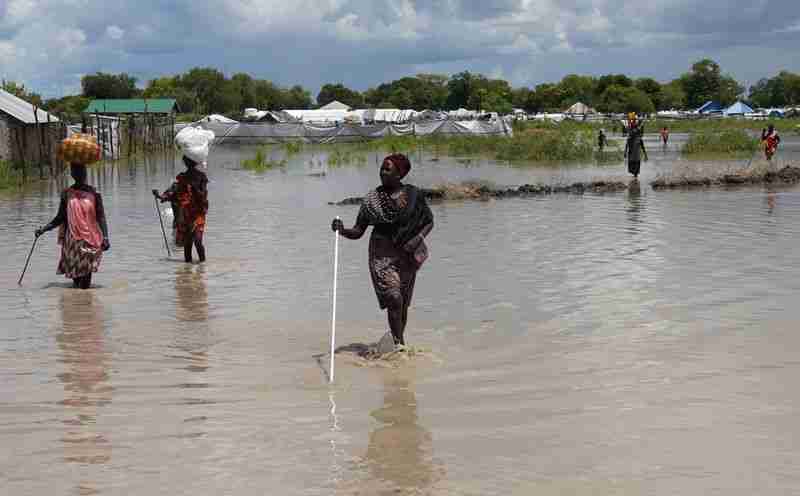 MUNDRI, South Sudan (Reuters) – After the worst rains in living memory inundated her fields, South Sudan farmer Alexandra Karama is, like hundreds of thousands of her compatriots, staring hunger in the face.

Her smallholding is located outside the western town of Mundri, one of the worst affected areas where swathes of crops have failed.

“My groundnuts have all been swept by the water… Nothing is left, no sorghum (either),” Karama, a grandmother, told Reuters in Mundri town, where she has been forced to seek shelter at a U.N. compound.

Like much of east Africa, South Sudan has been affected by unusually prolonged torrential rains over the last year. The United Nations estimates flooding has displaced more than 600,000 people, equivalent to more than one in 20 of the population.

Now, with the worst of the rains gone, aid agencies and the government of the young country, which seceded from the rest of Sudan in 2011, are rushing to distribute seeds for replanting to avert a famine.

“We (oversaw) the distributions of seeds and crops in order that people could be able to cultivate back despite the fact that many of the crops have already been destroyed,” said Humanitarian Affairs and Disaster Management Minister Peter Mayen Majongdit.

In Mundri alone, about 22,000 people have been affected by the floods and are in urgent need of food, shelter and health care, said U.N. humanitarian coordinator Safari Djumapili.

The U.N. was distributing some supplies, but roads to the area have been rendered impassable, complicating interventions, he said.