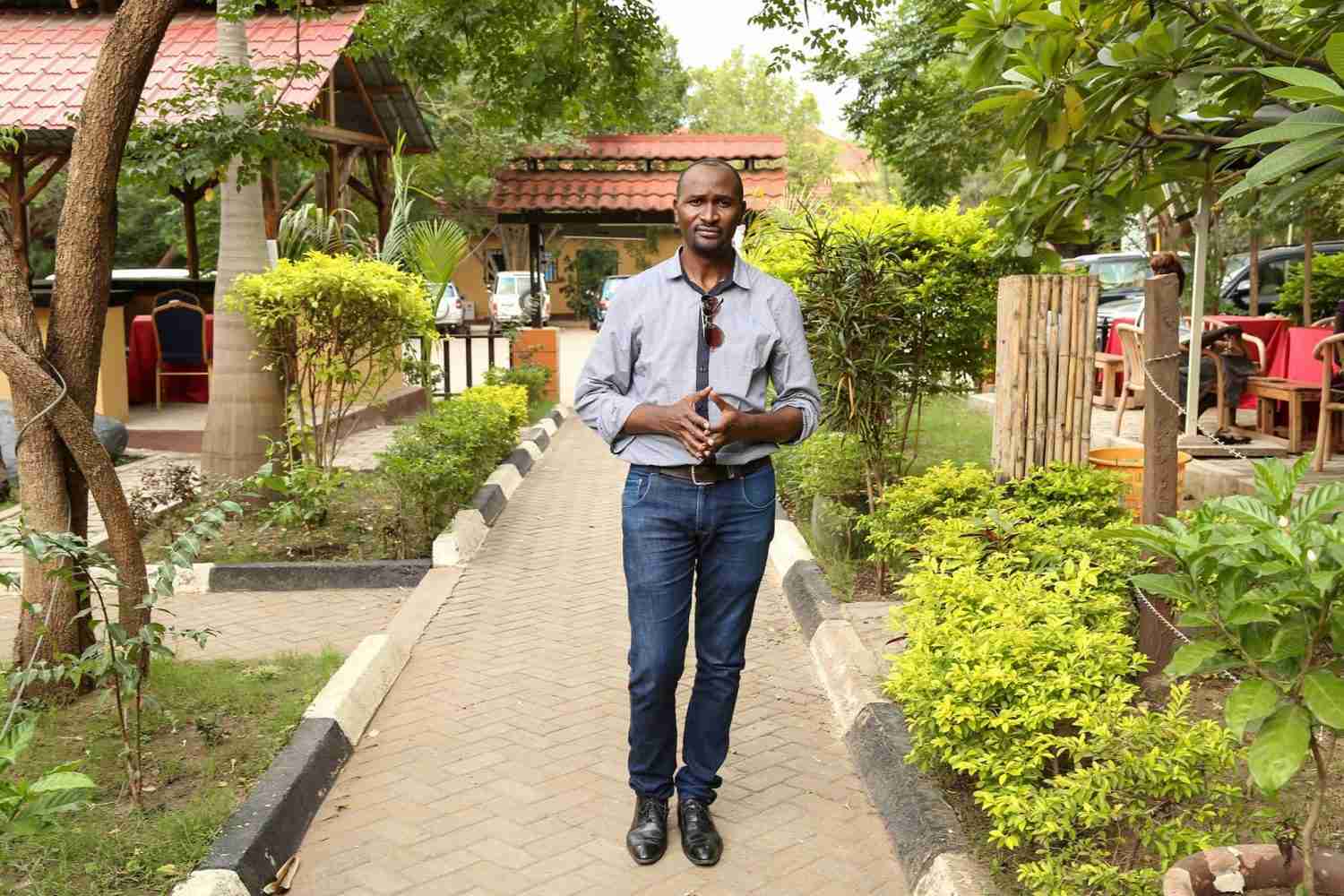 I am a humble deep thinker, a dreamer that believes in possibilities and a brighter next minute. I seek the deeper sense especially in what motivates us so for me, every waking moment is an opportunity.

RAMCIEL MAGAZINE: When did you enter into the modeling industry?

I entered the modeling industry in 1999 but had an early stint in 1996. But as a young boy, I had an inclination which they didn’t make sense. I was neatest in my primary school.

RAMCIEL MAGAZINE:     Have you ever been on the catwalk?

Yes. I believe you mean the runway. I was a model for a short time. I secretly trained on my sister’s heels. But I quit when I discovered I had the disadvantage of size. I lacked 2 inches in height and didn’t have a compelling chest, thus missed on many chances as a result. I remember contesting for a Mr and Miss Florida some time in 1999 and only managed to be a runner up with the taller bigger boys getting the title.

RAMCIEL MAGAZINE: When did you switch to talent management?

I entered the industry and had a very vibrant time but then retired almost as soon. I needed to know more in the business and in my research I discovered there was generally a lot of ignorance in the Industry, even of the trainers. I started sharing the information I gathered and found a more commanding role as a Modeling Trainer/Instructor and Choreographer. I was made the chair of a Modeling Club, and when people would call to ask to for models for different advertising needs Fashion shows, Spokes opportunities, TV and Print Commercials I had a list to choose from.

I begun in a rather fluid manner but realized to be effective, it required some structured manner in order to be professional. That is how I drifted into Talent Management and Image Consultancy which has since developed to Talent Consultancy, taking along with it other interest in Photography. I operate under Immortal Dream Consult and Tony Chirah Studios.

I was Choreographer and Talent manager for Miss Tourism Kenya when it began in 2001, trained all the contestants then producing all including Debra Sanaipei Ntimama, Vivian Maina and notably Ajuma Nasenyana. I was recalled to reconstruct it returns in 2011 and came up with the idea of ‘devolving’ the contest to the counties.

I began pageantry for South Sudan back in 2005 (Miss Malaika) and have continued with them to date. It gives me immense pleasure to be the only Choreographer in the world to have trained for two countries in the same year producing beauties for the Miss World competition and they scooped top 15 and top 5 positions at the finals in 2012 i.e. Shamim Fauz (Kenya) and Atong Demach (South Sudan) respectively. And in 2013, I trained Kenya and South Sudan for the same Miss World stage.

I was with Samantha’s Bridal Fair since it’s inception and became the Event Manager later, setting unmatched quality in production to date. The Fashion Shows that were its major attraction are yet to be matched.

I satisfactorily the combined interests of the Organizer, Designers, Exhibitors, Hosts, Models and the Audience. Through it I thrust to the limelight personalities like Ian Mugoya a TV host, Luanda Jawar a leading movie star, among others.

RAMCIEL MAGAZINE:  What drove you into modeling world?

I say it was a rear accidental slip but looking backward maybe I was inclined. But more importantly a chance blew up in front of me, I saw the gap and since I was available, I took it. It turns out that I was left out on a Country program when my theatrical group Mzizi Cultural Enterprises got a community theatre project deal in 1998. I hadn’t mentioned  was an Actor mentored by the best, among others Mr. Oby Obyerodhyambo (Dad). I shared the stage with greats like the Lt. Bantu Mwaura, Agan Odero, Amadi Kwa Atsiaya among others. With friends, I was setting up a Church based theatre group called Galaxy Players at St. Philips Church-Jericho when a friend invited me to visit a modeling group along Jogoo Road. When I did they demonstrated what they do and I asked them questions later. There were too many hanging answers which I sought to answer. That’s how I ended up in researching and, yeah, the rest is the history we are discussing.

RAMCIEL MAGAZINE:      Where did you grow up?

I was born at Jamaa Hospital off Rabai Road in Nairobi, as a baby we stayed in a single humble upper room in Jericho Lumumba Estate. As a boy I grew up in  Mugoro Village, Gangara,  Muminji Location, Mbeere North Constituency in Embu County. After teenage I juggled between village and the city. I’m urban villager or village urbanite.

RAMCIEL MAGAZINE: What is your next project?

I have an eye on Global Talent development. I am setting up a Global Talent Agency (KMF TALENT BUREAU) to feature young talent from right at the bottom. Juniors up to 17 years, Regular up to 38 years and Mature up to 48 then Seniors above. This cuts across Music, Modeling, Dance, Acting and Voice Talent.

With some friends we are also working on an exciting TV show, I wish not to divulge details at this point.  I’m also developing training needs for Cabin Crew/Inflight Attendants

RAMCIEL MAGAZINE: Some of your notable models signed to your house?

My successes are seen in media, arlines, communication and Fashion business mainly through models I trained in contests as opposed to sign ins, which has not been my direction. Ajuma Nasenyana tops the list but I have some like Rachel Wandia in South Africa and many around the world.

RAMCIEL MAGAZINE: What about the stories of sex and drugs in modeling?

RAMCIEL MAGAZINE: Tell us something we didn’t know about Kenya’s modeling industry

It is still unscratched. Still virgin with great potential. It has been abused by players and is the reason you find players struggling to keep sponsors. But when it will be respected by top players all will benefit immensely.

RAMCIEL MAGAZINE: Who is your all-time favourite male model

I will say Tyson Beckford. Has a story of mixed background, has a cause and is a father. We have many things in common.

Research. Know the business. Know it’s threads and expectations and rate your capacity to deliver to it and to your own expectations. Have a progressive plan and strive to surpass the norms. Avoid mediocrity.

Seek the requisite knowledge before you blindly enter into any deals. Consult an Industry Authority before jumping into deals, signing any contracts or accepting offers. There are many a make-believe agencies made by unscrupulous agents that will promise you billboard and TV commercials yet all they are interested in is your registration fees.

Have a target to achieve, check if the prospective agencies can deliver it to you. Don’t be tied up with people (friends, agencies and managers) that won’t help you progress. You are a brand, know your value (Earning for what work), what you can do (Capacity), package yourself (Professional Portfolio) for the market (Industry), and place yourself right (Agencies). Network widely and be honest to yourself and your agencies, work hard even if represented.

RAMCIEL MAGAZINE: Do you think black models have been represented in the fashion industry

Yes. We have a huge black folk out there but not representative enough. The world definition of black is mostly anyone not white or brown…and those are many. But in context, only a very small percentage is in serious industry in the world fashion capitals, meaning there is a great opportunity for emerging talent to rake in monies. But the challenge is the process of identifying them together with sourcing and conveyance, and with relevant skills.

I thank South Sudan for the hospitality, warmth and inspiration. Meeting all those I did including H.E. President Salva Kiir Mayardit was humbling. It is the continuation of a journey we begun in 2005.  I’m more convinced than ever before about four things.

(I) South Sudan will colonize the Fashion World one of these days, I said it first in 2012

(II). South Sudan has the most determined populace in Africa and that spirit is yielding. Sustaining the struggle for freedom for the length of time it took says it all and the same is reflected in the pageant. We begun seeking acceptance to Miss World in 2006, in 2009 had to stage a show in Juba to show it can happen and finally in 2012 they granted us a license. We hit top 5 and Model of the world, and Miss Africa in the same pageant. In 2014 we hit No. 2 for Model of the World title. We are going for the top

(III). South Sudan is a gem of limitless potential and opportunities. It’s only a matter of time and the world will be proud.

(IV) Miss World South Sudan 2017 is a continuation of the deep footprint this youngest Nation in the World is sinking in contributing to global positive change.

In closing, my biggest challenge has been the public understanding of talent as an alternative career and source of income, such that it is seldom acknowledged, therefore given little support and attention by authorities. More awareness is needed so that more resources are allocated to talent development. With KMF TALENT BUREAU, I hope to get over this. My greatest achievement is to rise to the top of the industry to become an authority whose opinion is respected within the circles locally and internationally.

How can people contact you? Include social media handles

Also look up the business platforms