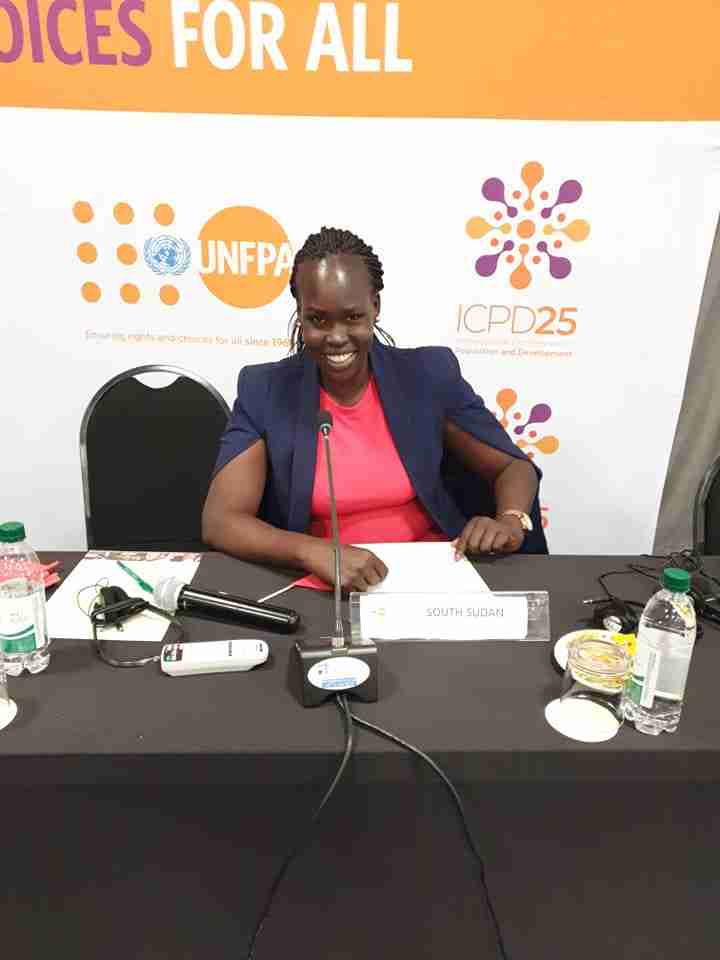 Tell us about yourself.

Well, I will tell you about the Viola Aluel that people don’t know.  I come from a polygamous family; my mother is the second wife of five. From my mother, I am the last born and the only girl to three brothers. Since I was six years old, I and my two older brothers were single-handedly raised by mother.  During my second year of university I got pregnant and, by the time I was nineteen, I became a mother to my daughter who is now sixteen.

My mother supported me financially and emotionally; she went as far as getting a nanny to take care of my child so that I could go back to university and finish my degree.  Today I am a married woman blessed with three children (two daughters and one son), and I hold a master’s degree from one of the best universities in Africa

Who is your role model?

My mother. This woman has seen it all — from her father being killed as she watched, having to drop out of school to help her mother raise her siblings, being forced to marry a man she didn’t love at nineteen, getting divorced in her early twenties, being separated from her seven year old first born, and becoming a second wife in her late twenties.

My mother’s life experience shaped me into who I am today. She is the reason why I advocate against gender-based violence, including all harmful traditional practices such as forced child marriages. Using my life as a real example, when I was only six years old, my parents separated. I saw how my mother struggled to provide for us. With only an intermediate certificate, she ensured all our basic needs were cared for. Sometimes I look back and imagined what my life would have been if my mother had not been educated, if she wasn’t empowered?

What is women empowerment?

Women empowerment is all about equipping and giving opportunities such as education, employment and skills that enable women determine their lives, overcome life challenges and being able to make their own decisions such as when to marry, whom to marry, including when to walk away from toxic and abusive marriages.

Could you briefly talk about a few barriers hindering women’s empowerment in South Sudan?

South Sudan is a patriarchal society which is a leading cause in persistent gender inequalities in the form of gender norms and beliefs that treat men and boys as superior to women and girls. Women and girls continue to be treated as secondary citizens with little status in the socio-cultural fabric of the society.

Women attain low levels of education, and access to resources for women and girls are limited. The social roles that hinder women from utilizing their full potential, prevalent child marriage, low formal labour market participation, lack of space for autonomous decision making even in regards to their own bodies and reproductive health, low participation in decision making, etc.

Why is women’s empowerment important for a country like South Sudan?

Women’s empowerment is important for the realization of gender equality as granted in the bill of rights of our constitution. Women and girls constitute about 48% of the South Sudan population, leaving them behind will hinder the achievement of sustainable development in our country.

Here’s a real example. Imagine a family where the husband and wife are both educated and employed. This is a family that will be able to have a good living including good shelter, health care, education and security.

What does South Sudan need to achieve women’s empowerment and gender equality?

The South Sudan constitution, and various policies and strategies, guarantee women, men, girls and boys equal rights without discrimination. The major problem we are facing in this country is reinforcement of these laws and policies. Customary laws that discriminate toward women and girls are still being highly reinforced and practiced. If we are to realize gender equality, Government must ensure all legal frameworks are reinforced with strict punishments for those that violate these laws and policies.

Thank you for your time Ms. Riak.  This had been Ramciel Magazine’s conversation with Ms. Riak.

Ms. Viola Riak is a Social Scientist and Gender Activist from South Sudan. She is currently a UNFPA Gender Analyst based in Juba. She has over 8 years’ experience in peace building, conflict resolution/transformation, and gender equality. Ms. Riak is a champion on prevention and response to gender-based violence including child marriage in South Sudan. She is a strong advocate on issues of sexual reproductive health services, including the right to access family planning. Ms. Riak holds a Master of Social Sciences in Social Development from the University of Cape Town (UCT) and a Bachelor of Arts in Community Development from Daystar University.